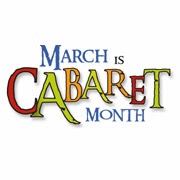 Paul Wingo will celebrate the release of his new CD at BLUES ALLEY (1073 Wisconsin Avenue NW, Washington, DC - 202-337-4141) on Monday, March 3rd with shows at 8:00 & 10:00 pm. Wingo started playing guitar at age 11. At 16, he began his studies with "Red" Dwyer and George Fitzgerald, and he attended the University of Maryland from 1964 to 1968. After college, he was a full time working musician, both teaching and performing. He continued to study, taking lessons from Billy Gibson, Frank Mullen, Howard Roberts, and Joe Pass. In 1976 he attended the Creative Music Studio in Woodstock, New York, and from 1980 to 1992 he studied with Dr. Asher Zlotnik. Paul was a member of the Army Blues Band for 6 years, during which time he often played at the White House and the Vice President's residence. Call for cover/minimum information.
copyright 2014 - See cabaret listings from all over the world at CABARET HOTLINE ONLINE
Posted by Unknown at 12:37:00 PM